Google has Releas New Android 6.0 Marshmallow.Here are the features you can expect from the latest version. 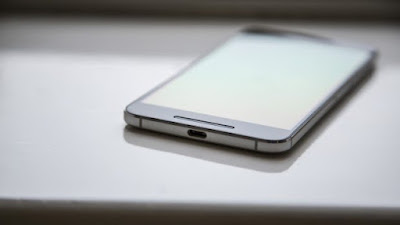 USB Type-C represents the holy grail of connections. It’s silly-fast, can be used any way up – and it’s going to be the most commonly used connection in the next few years. What’s more, it also allows for much faster charging than conventional cables: it can fully charge a Nexus 6P in around two hours.

As you’d expect, Android Marshmallow is future proofed with built-in USB Type-C support, so as long as your smartphone has the connection, Marshmallow can take advantage of it. 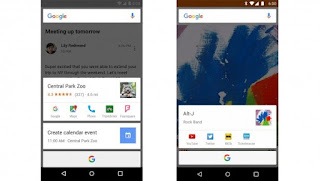 One of the biggest changes to Android Marshmallow comes in the form of Google Now. Although it may look the same as before, Google Now is now pre-baked into every area of the OS, and it’s cleverer than ever. Google Now’s focus is now on “context”, and that means the digital assistant will be better at understanding where you are, and what you’ll need to know as a result. 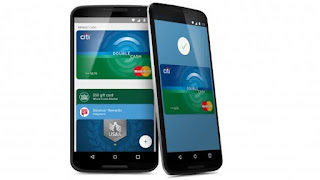 Much like Apple Pay, Android Pay allows users to store credit and debit card information on their smartphones, and then wirelessly pay for goods and services quickly and securely. To make it more secure, Android Pay uses a virtual account number instead of your own, and also keeps a detailed history of purchases made using the app.
If you’re unlucky enough to lose your phone, Google has you covered. Android Device Manager makes it easy to remotely lock and wipe your Android device in the event of loss or theft.
The only catch? Android Pay has been in the US since late September, but we still don’t know when it’s coming to the UK. 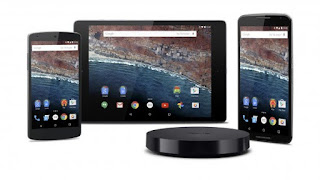 Marshmallow fixes one of our biggest pet peeves with the Android operating system. Google’s mobile OS uses the status bar at the top of your screen for key information about reception, battery life and more – but it can get crowded and scruffy at times.
With the System UI Tuner, users can now add their battery percentage to the system tray, and choose which other things they want to be displayed there. The result? Your Android phone will only show the information you want to see.

Although it seems like a relatively simple task, previous versions of Android made cutting and pasting text a fiddly, frustrating affair. Before, Google’s OS forced you to go to the top of the screen to cut, copy and paste – but Marshmallow lets you hover just above the selected text. If that sounds familiar, that’s because it’s exactly what iOS already does – but we’ll forgive Google as it’s a vast improvement over its original solution. 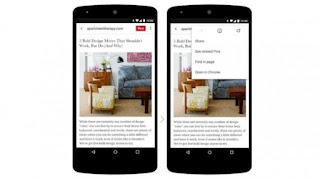 Google Chrome is one of the best mobile browsers around, and Marshmallow makes it easier for developers to integrate into their own, third-party apps. That means you don’t have to switch applications when you need to browse the web, and it also means that when you are let loose on Google’s browsers, all of your passwords and logins are stored and ready to go. The result? The whole browsing experience is much more seamless. 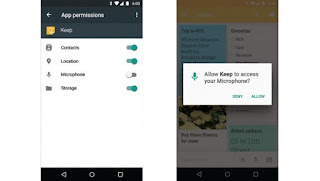 Although not one of the most glitzy features, Marshmallow’s app permissions overhaul will have an immediate effect on how you use your phone. Previous versions of Android forced the user to configure app settings at the point of install, making downloading apps an overly complex, drawn-out process.
Instead, Marshmallow only asks for your permission when it needs to. So, rather than configuring something such as Snapchat when you first download it, Android will ask to use your phone’s camera once, and only the first time you use it.
If you want to go back on your original decisions, Marshmallow has you covered. The new OS presents things by permissions rather than apps, so you can quickly see what apps are using your camera, accessing your photos, location data and much more. 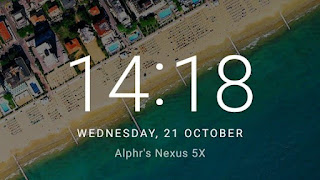 Having a stable, fast OS is all well and good, but Google isn’t afraid to inject a sense of personality into its software. New for Marshmallow, a new textbox just under the lockscreen time helps personalise your phone – and could be a perfect place for motivational quotes, important reminders, name tags and much more.

10. Storage is easier to manage

Smartphones have more storage than ever, but they need it: we now use handsets for everything from playing Angry Birds and using Periscope, to shooting 4K videos and downloading films. Even with removable storage available, we still run out of space.
Android Marshmallow makes it easier than ever to manage your storage. Replacing Lollipop’s mix of colours for a much more streamlined interface, Marshmallow shows users how much storage space they’ve used, and a breakdown of how they’ve used it. That way, it’s even easier to know what to delete. 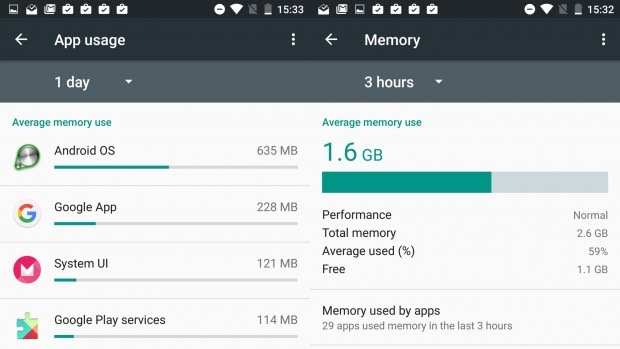 What’s more, Android Marshmallow also makes it easier to see which apps are using the most RAM, too.

There’s another feature that doesn’t sound spectacular, but makes a huge difference to your Android experience. When clicking on app-specific links – such as those for Twitter and Instagram – previous versions of Android would present the user with an “Open With” dialog box. As well as being ugly, this also made using Android a less than seamless experience. Thankfully, Android Marshmallow is much more intelligent and will know which app to open when you click on a specific link. That means, if you click an Instagram link, the Instagram app will automatically open and display the content. It’s simple, but effective. 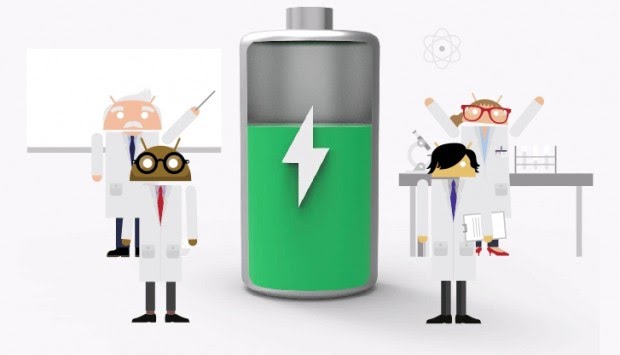 Smartphones such as the Nexus 5X pack in a range of sensors for fitness tracking and much more, but Doze uses them for a different reason. As well as of working out how many calories you’ve burnt, Doze uses motion sensors to detect when your phone’s not moving, and enters a deep sleep. The result? Your smartphone will stop all non-essential tasks such as Wi-Fi, syncs and jobs until the handset starts moving again. That means your battery should last much, much longer.
Interestingly, Doze will have control over all apps and other functions – unless otherwise stated – so Android users will benefit from improved battery life across the board. 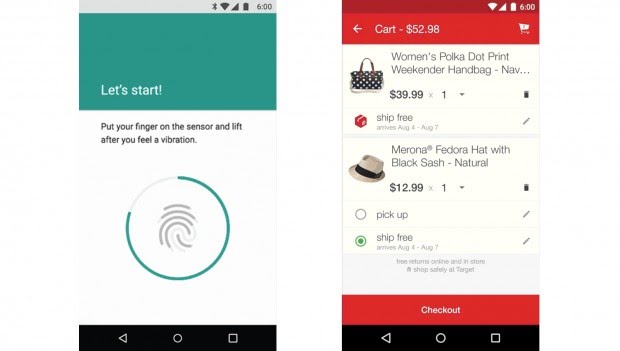 Fingerprint scanners have been on Android phones for a while now, but Marshmallow is the first time they will be used properly. Rather than a tacked-on feature for unlocking your Android phone, Google’s new OS pushes the fingerprint reader front and centre, which makes it compatible with a range of third-party apps.
In Marshmallow, fingerprint sensors can be used to log into apps like Evernote, or even buy things via in-app purchases. Simply put, authentication will be easier across the Android experience.

Marshmallow uses a brand-new layout for the app drawer, and it makes looking for applications a quicker, simpler process. Rather than scrolling sideways, users now have to scroll down vertically, and, if you’re too impatient, a search box at the top means you can find the app you’re looking for by typing the first few letters. 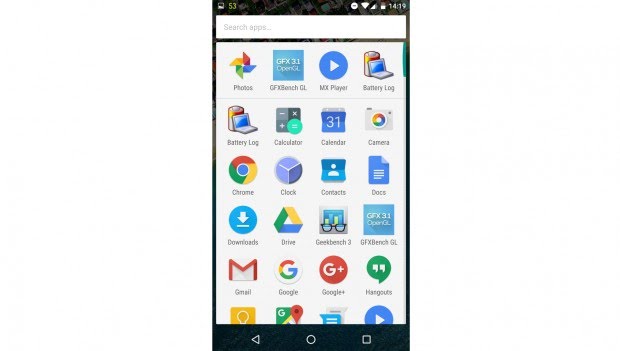 How To Schedule Downloads On Android

Compared to every other mobile operating system, app availability is high on Android. Just take a brief look at the Google Play Store,...
Read more
Android

How to Install Windows 10 From an Android Smartphone

A few years ago, DVDs and CDs used to be the only option to install Windows operating systems on a desktop computer &...
Read more

How to Use the Task Manager of Firefox Browser

Mozilla has made lots of improvements to the Firefox browser. Now it has become a more capable browser in terms of performance, stability...
Read more
Load more